Every four years, the Olympic Games dominates screens worldwide, and after pandemic-related delays, anticipation around the long-awaited Tokyo 2021 Olympics is exceptionally high.

The International Olympics Committee has confirmed the games are going ahead, but there’s still a fair bit of uncertainty. Online interest in the event has skyrocketed by 80% since the start of the year as fans search for news, and demand will continue to climb as more people search for Olympics-related content in the run-up to 23rd July.

With this year’s Olympics set to be a fan-free event, an incredible 4 billion people from 206 countries are expected to tune in. That’s eight hundred million more than in 2016.

Millennials and Gen Z are the biggest fans

When it comes to who watches the Olympic Games, our in-depth analysis of over 7 million households shows that the average Olympics fan varies globally. In most countries, there’s a keen interest from Millennials and Gen Z.

Across North America, Gen Z and Millennials stand out as the biggest Olympics fans, while research shows Baby Boomers are the least interested. The same goes for South-East Asia, Australia and New Zealand, where younger generations, including Gen X, are more likely to watch Olympic sports than their older counterparts.

Across Europe, the opposite is true, where Baby Boomers make up the most considerable portion of Olympics fans.

Of the top five countries with the most passionate Olympics fans, the US takes the top spot.

When looking at fan interest and consumption of Olympics content, the US surpasses the UK, Australia, Canada and Germany, with fan demand nearly three times higher than any other country.

Tied into this is the long-standing success of US teams at the Olympics. As the most successful nation, the country has won more medals than any other, at 2,522.

After the US, the worlds biggest fans live in the UK and Australia, with more than a quarter of searches for Olympic content coming from these countries. 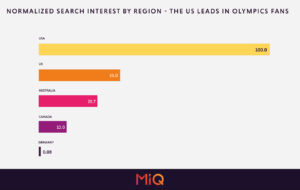 How are fans tuning in for the 2021 Tokyo Olympics?

Olympics viewership is shifting increasingly online. During the last Winter Olympics, online video consumption of the Games increased 128% compared to the 2014 Winter Games. The COVID-19 pandemic will only have exacerbated this, with data showing people are watching content on computers and phones more than ever before. 1.3 billion are expected to watch the Tokyo Olympics online rather than on TV.

The most passionate Olympics fans are those who watch Olympic reruns and online content like highlights and interviews. These viewers tend to be more engaged, spending four times as much time on a per-visit basis watching Olympics content.

Who switches to digital and who watches the Games on TV is also partially time zone dependant. Australia is expected to tune into the Olympics on TV more than usual this year as they can watch the Games live and enjoy being only a 2-hour time difference from Tokyo.

Reach Olympic viewers as they tune in

Read our full report on key insights for marketers around the 2021 Olympics here.