In a report earlier this year, we identified entertainment junkies as a growing segment of consumers who spent significant amounts of time using digital devices like televisions, computer screens, and mobile phones for entertainment during pandemic-enforced lockdowns.

And, while some of these behaviors are beginning to dissipate as the world opens up, user behaviors adopted during this period are likely to influence the future of entertainment.

Here are some of the ways lockdown has changed entertainment consumers and what it means for advertisers trying to reach them.

During lockdown, when people were confined to their homes they spent way more time with their screens. There was a dramatic increase in the volume of active TV households as lockdowns were announced in March 2020. Even with minor declines since those early pandemic days, the increased consumption of TV content continued throughout 2020 and beyond.

We identified a similar increase in digital interactions on entertainment domains reaching a peak in March-April 2020, with the levels continuing to remain high. 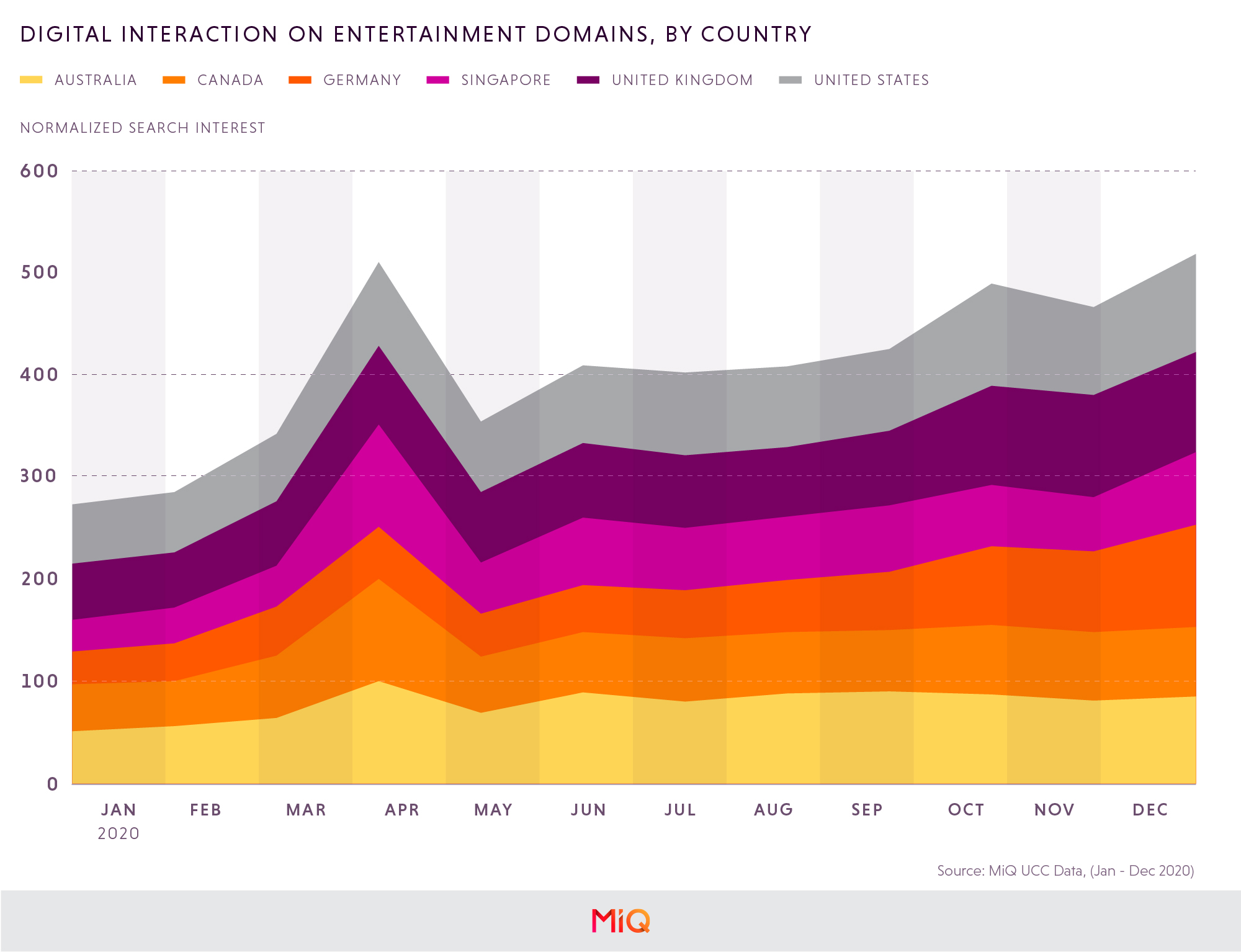 In a survey conducted this year, we found over 40% of households continue to consume more entertainment content than they did in the pre-pandemic period. Older consumers increased their viewership by over 45%, resulting in a surge in traditional TV viewership in 2020. Popular OTT mediums released new movies and web series, recording an increase in OTT viewership. 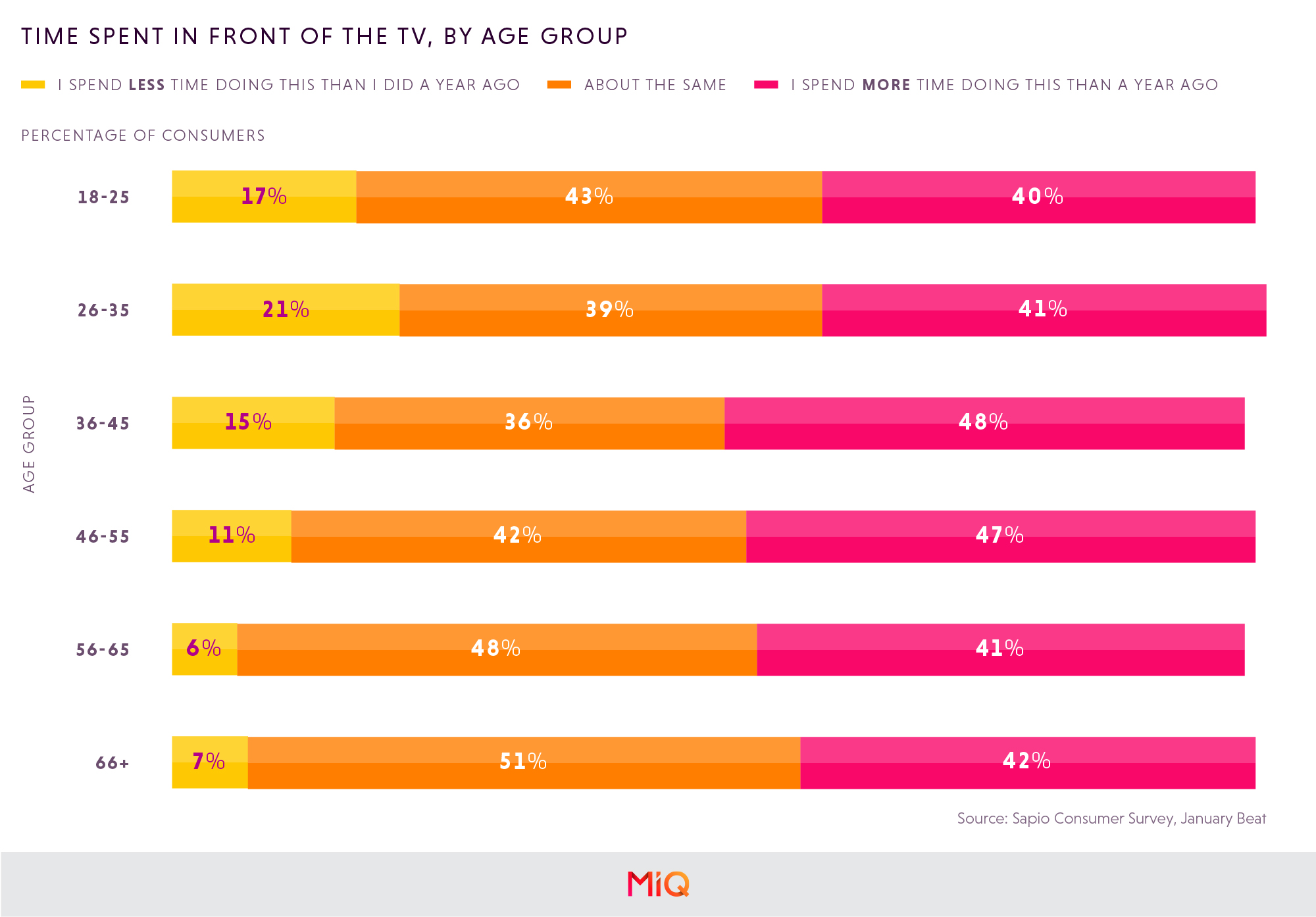 Lockdown increased TV viewership by more than 40% compared to pre-pandemic times. 65% of this increase can be attributed to viewership of movies and sitcoms, with the rest attributed to content related to sports, news, and other entertainment genres. Over 70% of consumers in countries like Canada, the US, and Australia watched more movies and tv shows. 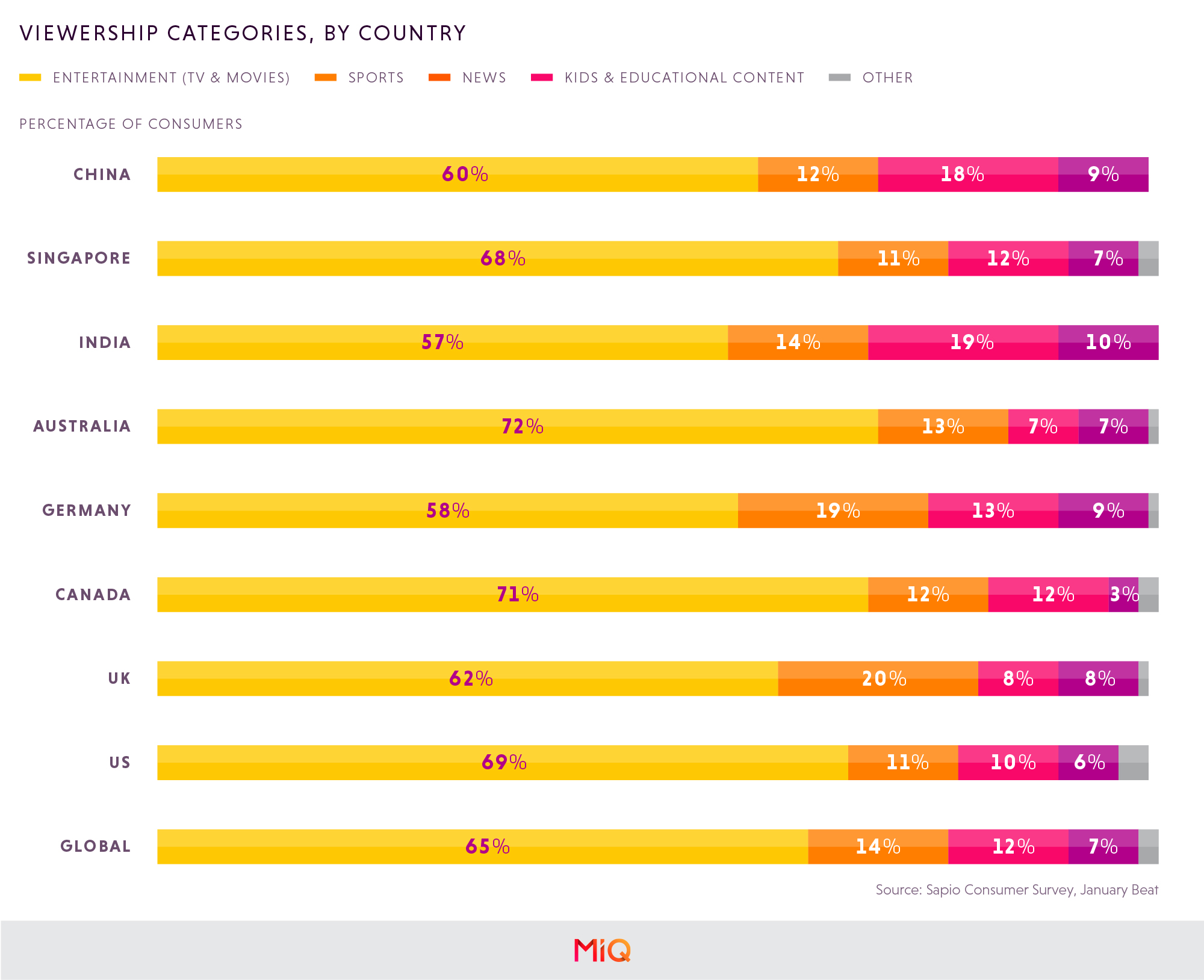 Interestingly, more than 60% of consumers in all parts of the world are likely to continue these subscriptions in the future.

The future of entertainment is not just at home

With vaccinations being rolled out, consumers are slowly getting ready to venture out of their homes. Thanks to safety protocols at theaters and adventure-themed parks, globally 44% of consumers are excited to watch movies in theaters again and 32% of them are open to visiting adventure parks. A little less than 30% of consumers are looking forward to attending sporting events and music concerts.

The pace of recovery from the pandemic is faster in China than in the rest of the world, with 50% of Chinese consumers looking to experience entertainment outside of the home. Americans and Canadians want to attend sporting events and gaming arcades, with more than 65% of consumers looking to go to in-person venues. There are still a small percentage of people (especially with kids) that plan to be cautious and continue to use digital entertainment at home. 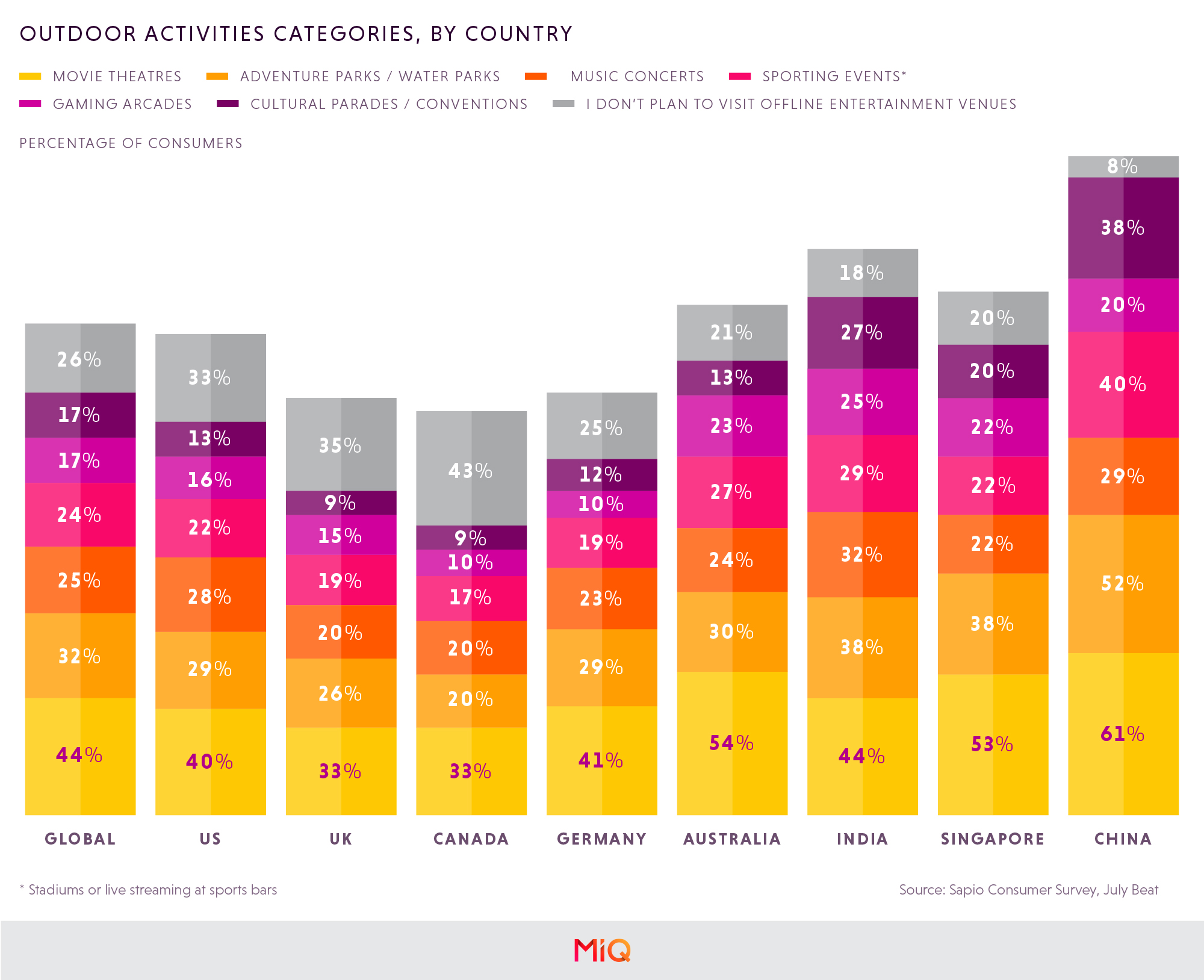 Shang Chi viewership in the first two weeks of release

Marvel Studios ‘Shang Chi and the Legend of the Ten Rings’ which was released theatrically on September 3rd all over the world, has brought Marvel fans and movie-goers back to the big screen, despite a multitude of safety protocols. This is one of the first movies exclusively released in theaters in the past year and a half.

The movie has been well reviewed by critics and theatergoers. Footfalls around movie theaters in America peaked after the release of Shang Chi throughout the first week, resurging the next weekend. 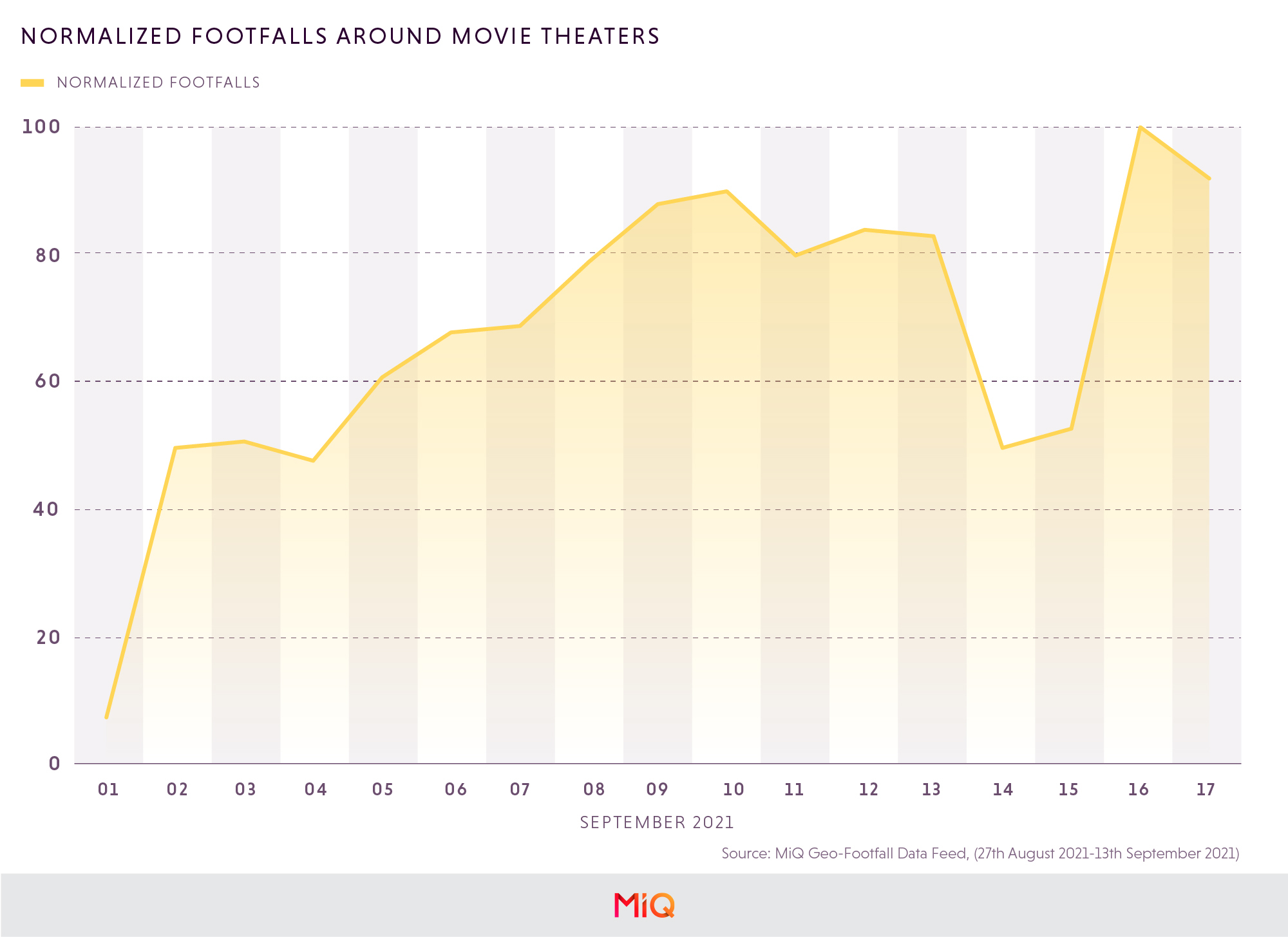 Movie-goers have increased other offline activities

The revival of movie-goers also is bringing back other offline activities, and our data suggests that nine out of 10 movie-goers grabbed food at a quick service restaurant, like Taco Bell or Subway and 7 on 10 movie-goers went to a restaurant for a dine-in experience.

Once people have ventured out to movie theaters, we found that more than 50% of these audiences went to fill their cars with fuel. They also went shopping at big box stores like Walmart and Costco. Less than 50% of people went to gyms, banks and did other errands. 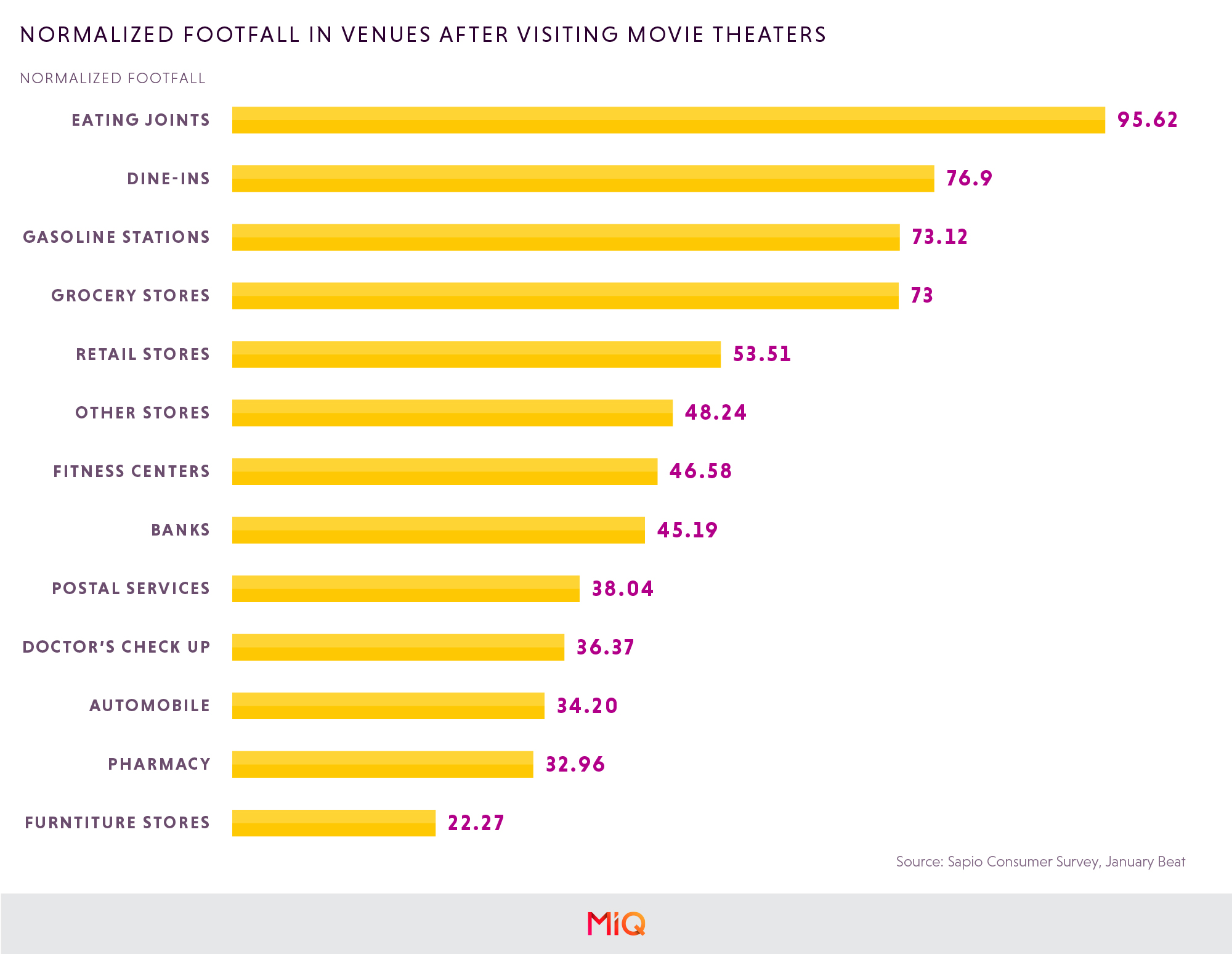 Entertainment outside the home is coming back in a big way. Marketers have to shift their focus to offline advertising mediums like DOOH without forgetting about customers’ online habits. Strong cross-media programmatic campaigns that tap into consumers’ television viewing behavior while also understanding footfalls can help you reach the right audience at the right time.

With offline entertainment coming back, it’s a clear sign of an economic upturn. Consumers are becoming more comfortable with the idea of exploring life outside their homes, and spending money on entertainment and at stores. Marketers may have to shift their plans and that’s why working with a partner that has a proven track record of navigating through online and offline syncs can help. Using consolidated cross-media efforts to drive performance-driven campaigns will help your brand to reach entertainment junkies as they come back out into the world.